Richard Paul George Andrew Brandram, the only son of the late HRH Princess Katherine of Greece and Denmark and the late Richard Campbell Andrew Brandram, died at his home at Combrook, Warwickshire, on May 9, 2020.  He was 72 years old. 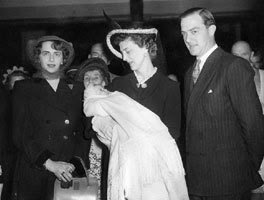 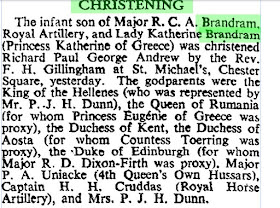 He is survived by his second wife,  Kate, and his three children, Sophie, Nicholas and Alexia and four grandchildren.   He was baptized on May 31, 1948.


For a number of years, I corresponded with Paul, as well as with his mother, Katherine, who was styled as the daughter of a duke in the United Kingdom.
This was ordained by a Royal Warrant by King George VI in September 1947. 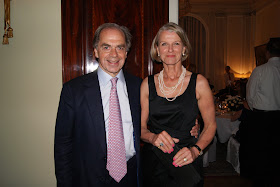 Paul was the executive director of the Marine Division of Willis until 2015.  He most recently worked for A.J Gallagher, as Executive Director - Marine - Hull/Liability, specializing in "handling the retail business working directly with Greek Shipowners around the world."

He was close to his Greek cousins, especially, King Constantine II and Queen Sofia, who is the godmother of Paul's daughter, Sophie.   The King was Paul's best man at his first marriage.

I finally met Paul and Kate in Belgrade in 2013.  I went to look for my name at a particular table but it wasn't there.  The name card said Paul Brandram.  Due to the late arrival of several other guests,  several of us had been moved to other tables ...it worked out because I got to meet Paul.  He and Kate and I chatted after dinner and we also sat together outside at the State funeral.

My condolences to Kate and to Paul's three children, Sophie, Nicholas, and Alexia and his grandchildren.  Paul was a true gentleman, kind, helpful.  Hugs to all of you.