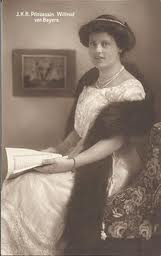 Wiltrud was born in Munich on November 10, 1884.  Her father succeeded to the throne in 1913, and abdicated  five years later.  Her elder siblings married well.  Rupprecht was married twice, to Duchess Marie Gabrielle in Bavaria and Princess Antonia of Luxembourg, respectively. Adelgunde married the Prince of Hohenzollern.  Maria Ludwiga was the wife of the Duke of Calabria.  Franz married Isabella of Croy.  Mathilde married Prince Ludwig of Saxe-Coburg and Gotha.

But finding husbands for the younger daughters proved difficult.   The youngest daughter, Gundelinde married Count Johann Georg of Preysing-Lichtenberg in 1919.

Neither Hildegarde and Helmtrud never married.   Wiltrud was forty years old when she wed the Duke of Urach, a widower.  They were married in 1924, and he died four years later.

One wonders what were the reasons for not getting this princesses down the aisle.  Wiltrud and her sister, Helmtrud, were named for Kaiser Wilhelm II.   Wiltrud appears to have been an attractive princess, who should have caught the attention of a Habsburg or a Bourbon.     In 1905, Wiltrud and her sisters were profiled in the Chicago Daily Tribune.

"Princess Wiltrud, 21, who is the next to the youngest of the four daughters, is considered to be one "of the most beautiful princesses in Europe." She has "absolutely perfect features, and wonderful dark eyes, is gifted musically and is a linguist." She is also an athlete, "skilled in riding, besides having other accomplishments."

In spite of her beauty and her accomplishments, Wiltrud has no wooers and she "promises to be left adversely alone by royal matchmakers in the same way that two of her older sisters have been."

An earlier post shows postcards from the Bavaria-Urach wedding.