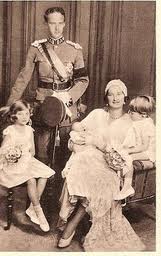 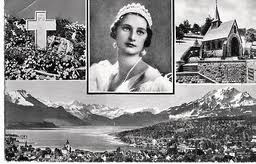 Queen Astrid of the Belgians, 29, was killed today in a car crash that also injured her husband King Leopold III. The couple were on vacation in Switzerland, and were planning to do some mountain climbing. The queen was fatally injured when she was thrown from the car, which was being driven by her husband. King Leopold had taken his eyes off the road for only a few seconds, to look at the map that Astrid held in her hands. The car swerved, and hit a tree. Astrid suffered a fractured skull, and she apparently died in her husband's arms. Leopold's father, King Albert I, suffered a similar fatal injury,while rock climbing only eight months earlier.
Leopold and Astrid, a princess of Sweden, were married in 1926.
The Queen, who was raised Lutheran, joined the Roman Catholic church several years after her wedding.
The couple have three children, Josephine-Charlotte, 6, Baudouin, 4, and 14-month old, Albert.
KIng Leopold accompanied his wife's coffin for the "sorrowful journey" back to Brussels by train.
Marlene Eilers Koenig at Friday, August 29, 2008